On 18 October 2018 H.E. Mr. Ban Ki-Moon, former Secretary-General of the UN, was awarded the ‘"A cry for freedom" commemorative bronze statute by Ambassador Katalin Bogyay on the occasion of the Hungarian National Day commemorating the 1956 Hungarian Revolution. On the occasion of the Hungarian National Day commemorating the 1956 Hungarian Revolution  a luncheon was hosted by Ambassador Bogyay in honour of  H.E. Mr. Ban Ki-Moon,  former Secretary-General of the UN, in the company of Mrs. Ban Soon-taek, H.E. Mr. Cho Tae-yul Permanent Representative of the Republic of Korea to the UN, Mrs. Hyekyung Kim, H.E. Mr. Ib Petersen Permanent Representative of Denmark to the UN as well as Ms. Myrtill Nádasi and  Mr. Péter Sasdy Hungarian-born British film and television director.

During the luncheon, H.E. Mr. Ban Ki-Moon was awarded the "A cry for freedom" commemorative bronze statute by Ambassador Katalin Bogyay.

In 1956, the Hungarian people rose up against the communist dictatorship and made it clear that freedom comes first.  62 years ago, the entire world has learned about the heroic fight and despite its failure, it was highly influential to the outcome of the Cold War. For decades, the UN kept classified documents, which contained mosaics about the activities of the Special Committee on the Problem of Hungary that was established by the General Assembly in January 1957 with a mandate to investigate and gather evidence on what happened during and after the revolution. 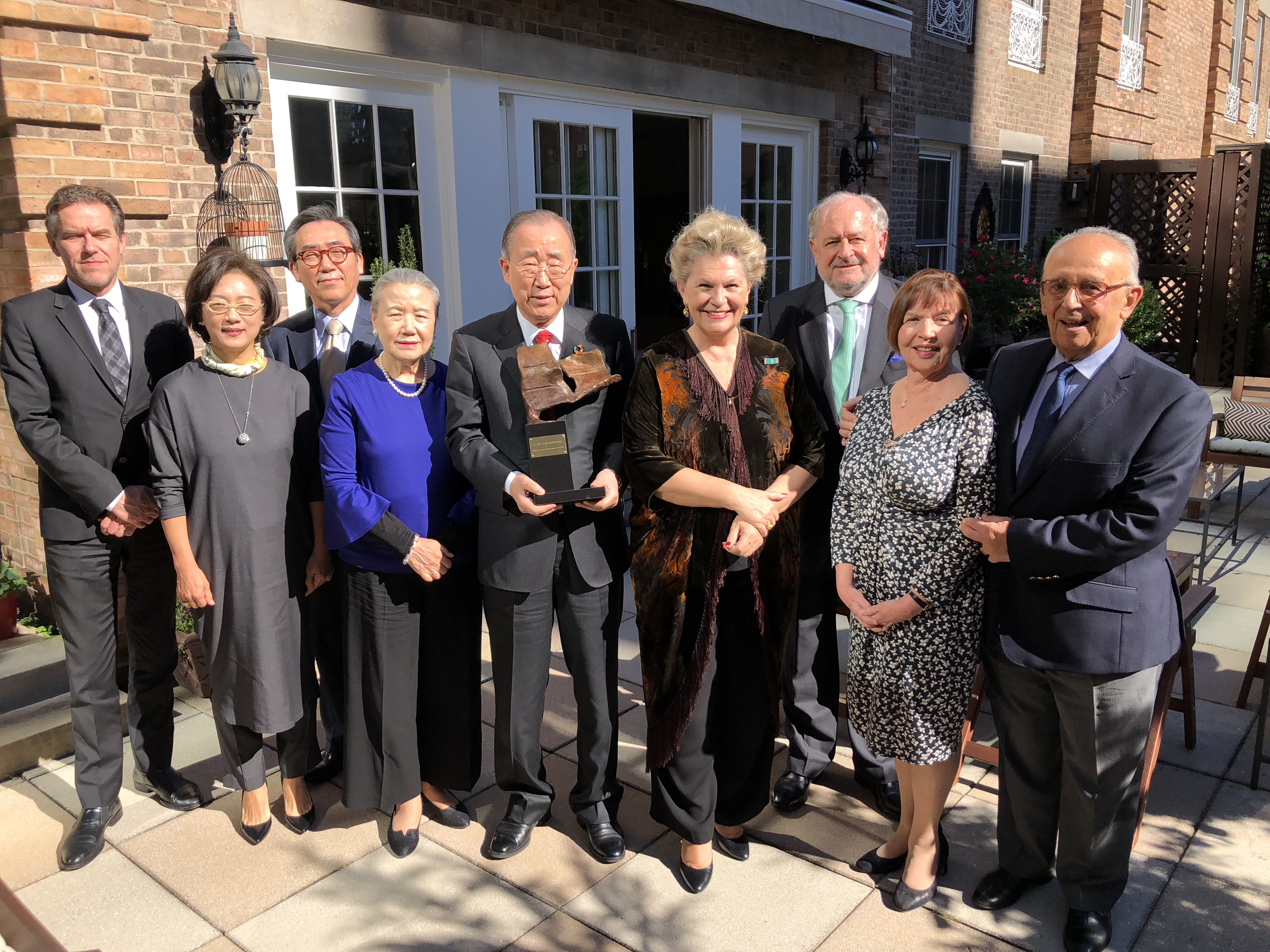 Upon request by Hungary and with the support of H.E. Mr. Ban Ki-Moon many hundreds of pages of classified documents was opened up for research purposes.

H.E. Mr. Ban Ki-Moon’s efforts to promote freedom and human rights as well as his support through the 60th Anniversary Memorial Year of the 1956 Hungarian Revolution are greatly valued in Hungary.

The statute entitled “A CRY FOR FREEDOM”, stands as a symbol of aspiration to peace and a reminder that freedom can never be taken for granted. The bronze statute designed by Ms. Hedva Ser, renown French artist, UNESCO Goodwill Ambassador for Cultural Diplomacy and Artist for Peace.

The guests were also presented the book, entitled A CRY FOR FREEDOM: Reflections on the 1956 Hungarian Revolution at the UN and Beyond, that was published on the 60th Anniversary of the Revolution. The volume gives an overview of the events of 1956, and subsequent activities and discussions organized by our Mission throughout the Memorial Year.