The Secretary-General tabled his report on the repositioning of the United Nations (UN) development system on 30 June 2017, as part of his wider initiative to strengthen cohesion, increase accountability and improve results of the UN as a whole. The mandate to bring the functioning of the UN development family to its full potential stems from the Agenda 2030, and the General Assembly resolution number 71/243 on the Quadrennial Comprehensive Policy Review of UN operational activities for development (QCPR). The report draws up eight principles and thirty-eight action proposals for the way ahead, worked out with the lead of Deputy Secretary-General, Ms Amina J. Mohammed. H.E. Ambassador Katalin Annamária Bogyay, Hungary’s Permanent Representative to the UN welcomed the report and highlighted two areas, where further improvement of coordination and coherence is needed by the UN: provision and sustainable management of water and sanitation, and the fight against human trafficking and modern day slavery. 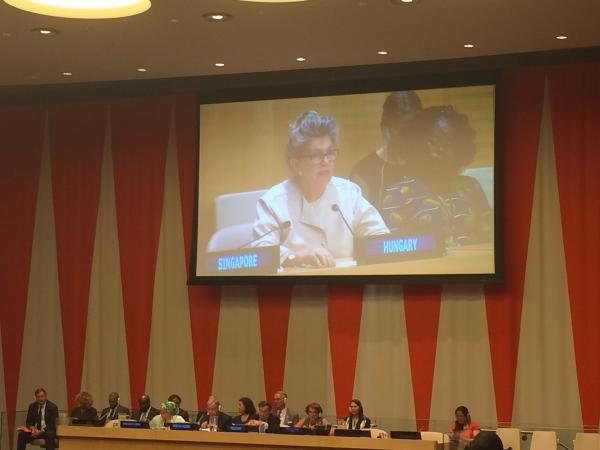 In his presentation of the report, the Secretary General stressed that the 2030 Agenda is the best mean to improve human lives without harming the planet, to advance economic, cultural, social and political rights, as well as to enable global peace and security. Development being the most powerful tool for prevention, the UN needs to get “fit for purpose”, in order to better meet today’s complex and interlinked challenges.

As a roadmap for change, the Secretary General sets out in the report the reform of the peace and security architecture by giving adequate priority to prevention and sustaining peace. He aims at linking the development system to the overall UN management reform by simplifying procedures, decentralizing decisions through stepped up transparency, efficiency and accountability. This shall include strategies and actions to achieve gender parity, to end sexual exploitation and abuse, and strengthen counter-terrorism structures. A more detailed report will follow suit from the Secretary General’s office in December 2017.

In welcoming and supporting the key findings of the report, H.E. Ambassador Katalin Annamária Bogyay, Hungary’s Permanent Representative to the UN stressed that the 2030 Agenda makes it necessary to scale up coherence and efficiency. While building on existing mechanisms and functions, Hungary sees two main areas, where the UN development system would need to go through improvements. The report underlined significant gaps that data had shown in coverage of SDG 6 on water and sanitation, besides other crosscutting issues. As the water dialogue co-moderated by Hungary and Tajikistan also revealed, Member States and stakeholders need an improved and more integrated support by the UN system to implement and follow-up water related SDGs in a coherent manner. There is a need to work towards solutions based on the convergences.

The second area is the fight against human trafficking, forced labour, sexual exploitation and other forms of modern slavery, where Hungary finds it timely to step up coherence among actions of UN entities linked to the areas of conflict prevention and counterterrorism. Hungary remains hopeful that these points will be taken on board in elaborating recommendations for the next document due in December. In his reply to the Member States’ comments, the Secretary General thanked Ambassador Bogyay for pointing out human trafficking, which is an area especially high on his agenda.